A Parasound hi-fi system signed by the rock star and platinum-selling artist, Fish, recently sold at auction in aid of Fish’s chosen charity, Chest Heart & Stroke Scotland, and the lucky winner was able to meet his musical hero during the presentation of the proceeds to the charity. 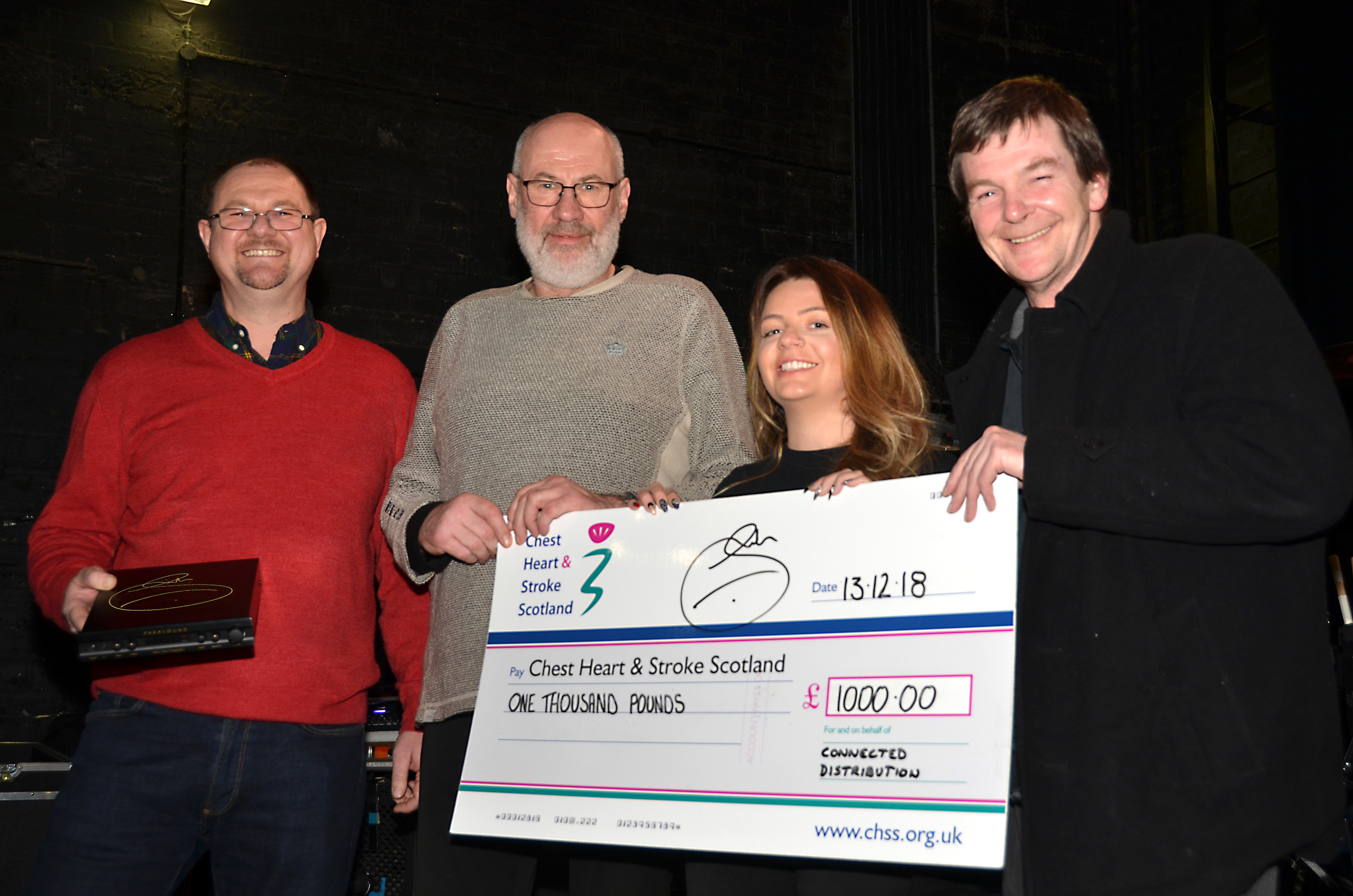 Connected Distribution, UK distributor for Parasound, organised the charity auction in conjunction with Fish, who is a Parasound endorsee. The signed Parasound Z Series hi-fi system, comprising: Zpre v.2, Zamp v.3, Zdac v.2 and Zphono was listed for sale on ebay and publicised to the huge fan base via the Fish’s website and social media channels.

Barry Capper, a lifelong lover of Fish’s music, was the winner of the system, which had been bid for by his wife as a surprise Christmas present. Barry was invited to join Fish for the soundcheck at the final date of his European tour in Glasgow, before the presentation of a cheque for £1000 to Lauren Mackenzie of Chest Heart & Stroke Scotland. Barry and his family were then able to enjoy the sell-out concert and got a chance to meet up with Fish after the gig.

Mike Bonnette, director of Connected Distribution says, “We were delighted to be able to facilitate this charity auction in conjunction with Fish and the very worthwhile charity, Chest Heart & Stroke Scotland, to support the amazing work it does with people across the country in helping improve their rehabilitation from stroke, heart attack and breathing conditions.”

Commenting on the afternoon’s event, Barry said, “Just wanted to say a big thank you to Fish and Connected Distribution for making my year with the surprise presentation onstage before the gig in Glasgow. And for a great night.”

“For any loyal fan, owning something signed by your musical hero is a real coup.” adds Mike Bonnette. “For Barry, it’s not only a genuinely unique souvenir of his favourite musician, but a top flight Parasound hi-fi system that will enhance his enjoyment of Fish’s music for years to come.”

Lauren Mackenzie, assistant fundraiser, Chest Heart & Stroke Scotland, said, “We were absolutely delighted to be Fish’s chosen charity. This incredible donation will help people in Scotland to rebuild their lives after diagnosis of a chest or heart condition or following a stroke. A huge thank you to Fish and the Capper’s for supporting us and helping to change lives.”

Derek Dick, otherwise known as Fish, is a successful solo artist and the former Marillion frontman and lyricist who fronted the band from 1981 to 1988, during the period of the critically acclaimed and iconic Misplaced Childhood album. Since that time, he has gone on to explore contemporary pop, traditional folk and rock music, releasing over 12 albums and touring the world to a huge and loyal international fan base.

Fish has chosen Parasound’s exceptionally well-reviewed Halo Integrated amplifier for the main audio system in his home and studio located close to Edinburgh. The Parasound amplifier will enable Fish and his band members to record the forthcoming album, “Weltschmerz”, in their dedicated studio facility and carefully monitor the results before commercial pressings are made.